Turning 18 is a milestone in any young person’s life. For Luca and his family, there were extra reasons to celebrate. After years of struggling with increasingly challenging  and complex needs, Luca moved from his family home into a specialist children’s home where his support needs could be best met.

During his time supported in the Chartwell home, Luca, who is autistic, has “become his old self again”. His father Mark explains:

“Luca was 18 at the end of 2018. He was diagnosed as having an autism spectrum condition when he was two. It happened overnight really, he was fine until he was around 18 months and then his speech stopped, he started twirling round and round. He didn’t really talk again until he was six. It had a huge impact, and it’s not been an easy journey, you ask any parent of a child with autism, it’s been really hard.

“From then on it was a long journey seeing one person after another. There were many challenges, and it impacted on the whole family – our daughter, my wife, me.

“Luca can talk, but it’s very limited and simple. We need to be really clear on how we communicate.  There were a number of challenges really – his communication skills, tantrums, us having to help him with most things.

“It was a challenge trying to keep him stimulated a lot of the time. And it was fine, we did it. He’s our son and the most important thing was taking good care of him.

“It was when he got into his teens that things started to get quite bad. When he was small it was easier because you could pick him up and remove him from a situation.

“Then when he got to 13 and 14, he started repeating himself all of the time. He would tap people on the elbow repeatedly and then it built up and built up and got to the point it was quite extreme. He was biting, punching and scratching. He would hit himself, scratch himself and would be banging his head. It was a nightmare.

“But professionals said that we shouldn’t be living like this and we just kept going. We really felt that we couldn’t give up on Luca. But the impact was spreading. It was impacting on our daughter, and on my wife and I’s mental and physical health. The situation kept getting worse and we involved CAMHS.

“Things got really bad. We broke down into tears and said we were struggling. It was off the scale, it wasn’t 1-10, it was 15.

“I was trying to work too and that meant my wife was spending a lot of time alone with Luca, and when it was too much I would leave early and come home to help. It was impacting everyone.

“ Luca was attending a special needs school but when he was at home he would bite and knock us over. It would start in the morning and continue.

“We just kept going forward – then it just got too much, we were genuinely struggling. We were told ‘there are other options’.  We really struggled with that. We couldn’t think that he wouldn’t be at home and we wouldn’t look after him. But it was an impossible situation.

“Everything became very urgent and it became a priority our family was falling apart.

“It was all a bit hazy. I was losing my mind. I remember them saying; ‘we’ve got this place called Chartwell’ and we thought it would be like a hospital ward. So we went to look and we thought ‘it’s just a big house’.

“He’s been with Chartwell 18 months and for us, that’s our second home because that’s where Luca’s home is. Things have been great – while the staff there went through the extremes too, but they have always stuck by him no matter what.

“He’s made so much progress it’s unbelievable. He was on risperidone and they have taken him off that and a lot of his speech has come back. It’s a nasty drug to be on and it was difficult to get him off that but the team managed to wean him off it.

“Off of that, it’s like getting the old Luca back. He talks about places he used to go. It has been absolutely fantastic. Staff have been able to take him out and about and while, it is far from over, there is a massive improvement. It’s great to see that.

“When we go and visit him, we have a laugh and chat. It’s just like a home from home which is what we want. If he can’t be at home, we wouldn’t want him anywhere else. It’s very homely.

“He enjoys going out in the car, getting his hair cut and he likes going for walks. He’s been making things like bread and pizza in the kitchen and  eating with people, which is a real improvement for Luca.

“He’s like his old cheeky self, we get lot of smiles and interaction. It was a really hard decision for him to go there, one that I’ll always ponder. But it has done us all the world of good.

“It still breaks my heart but, when you look at the positives, we couldn’t manage. It wasn’t fair for any of us. We couldn’t do the things with him that he’s enjoying doing now. So I suppose, it’s a bit of a success story. All you ever want is the best for your child.“ 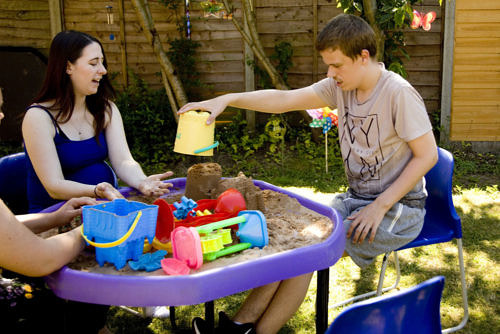 Find out about working for us